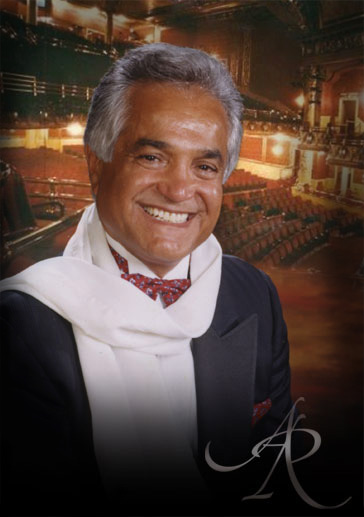 Anoushiravan Rohani an Iranian composer and pianist who was born in Rasht, Iran in 1939, Anoushiravan received music lessons from his father Reza Rohani, himself a poet and violinist. Anoushiravan later graduated from the Persian National Music Conservatory in Tehran.

His passion for the keyboard and piano was so great that in 1963, he imported the very first electronic organ to Iran. Aside from the organ, he is also heard playing the accordion in many of his early works.

Anoushiravan Rohani has written and performed with a plethora of famous Iranian & International singers such as Gabriela Fontana, Klause Meine, Emel Sayin, Hayedeh, Pouran & ect… His productive career includes over 500 compositions that includes numerous vocals, orchestral music, piano pieces and film scores, among them “Maybe I Maybe You”, “Soltan-e-Ghalbhaa", “Dele Kuchuloo," and “Gol- e-Sang." His most famous piece, “Tavalodat Mobarak,". The Iranian version of the “Happy Birthday" song is undoubtedly the most often-played Iranian song.

What is unique about Anoushiravan’s accomplishment is his immense success outside of Iran, where he is much admired among international music circles. Indeed, Anoushiravan defines much of his work in the genre of light classical, and a bridge between the Eastern and Western musical traditions. Many of his songs have been performed in different languages in several countries. Indeed, at the end of one of his private concert in June 1978, Edward Heath, the former British prime minister and leader of the Conservative Party, who has served as a guest conductor of The Symphonic Orchestra of Great Britain, in an appreciation letter to Anoushiravan wrote: “I was most impressed with a brilliant technique you displayed. The quality and variety of sound you produced from the instrument was most remarkable." Among the many international honors that Anoushiravan has received, he was awarded the first prize in Spain’s Music Festival for his song Mi Destino (Spanish version of Soltan-e-Ghalbhaa). More recently he has been working with Hanover Opera and Ballet Orchestra in Germany. Today, after nearly a half a century Anoushiravan remains energetic and vibrant as ever and is universally recognized as one of Iran’s finest composer, pianist, and electronic organists.